(Outdoor Hub) - America’s second biggest state has certified one of its latest state record catches and it’s not a scale-busting alligator gar–it’s a seven-pound goldfish. John Wiseman, the angler who caught it, cracked a joke at the record he now holds.

“While it’s prestigious, it’s hilarious,” Wiseman said to Lonestar Outdoor News. “You live your whole life wanting to catch a record and then you catch a damn goldfish.” 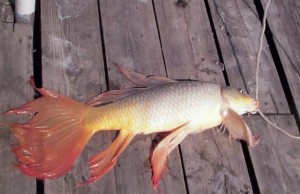 Wiseman had spent a slow night attempting to catch crappie and catfish on Lake Tawakoni in early June. After failing to reel in a fish for three hours, something finally took a hold of one of his dough baits made of Wheaties and Big Red. He pulled in the oversized goldfish and after being persuaded by fellow anglers at Uncle Rick’s Duck Cove Marina, Wiseman had the catch weighed and photographed.

Wiseman turned in his record application to the Texas Parks and Wildlife Department (TPWD). The department certified it at 7.24 pounds and 30 inches long. He beat the previous record length by more than two inches.

Wiseman’s fish broke the state rod and reel record. When left to grow in the wild, they can reach amazing sizes. While this one wasn’t of an extraordinary size, it was enough to beat the current record. The bowfishing record that currently stands is a little bigger than his fish, which weighed 12.77 pounds and was caught by Donald Lee on October 31, 2009 at the Ray Hubbard Reservoir.

Update: The Texas Parks and Wildlife Department has informed us that they have retracted all certified records for this catch based on misidentification. The fish Wiseman caught has been determined to in fact be a form of the common carp called a Butterfly Koi. Wiseman’s catch is, however, a record-by-weight for a common carp for Lake Tawakoni.