(Outdoor Hub) - A fish rarely seen by humans and weighing in at 300 pounds became the center of a bizarre fish story in Cabo San Lucas, where the "mystery" fish wound up getting stolen. 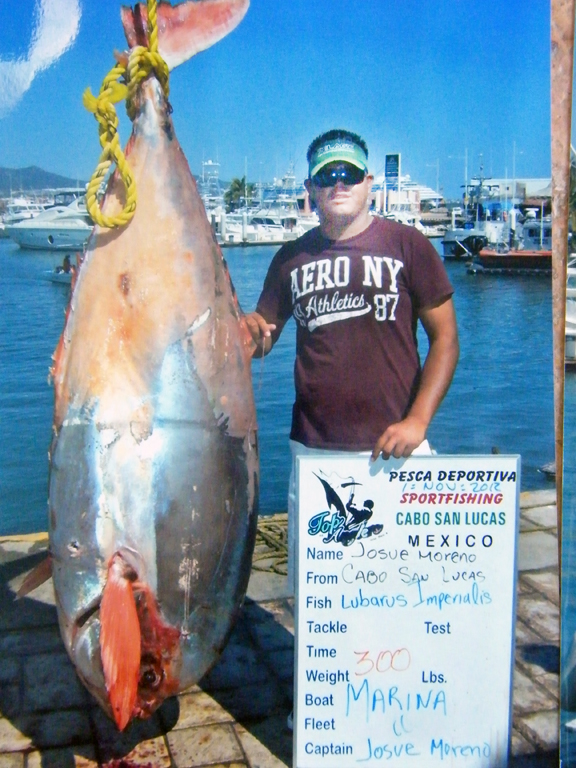 The fish was described by the Pisces Sportfishing Fleet blog as having a dorado-shaped head, tuna-type body, wahoo tail (with half of it missing) and a snapper color. Pisces eventually identified the fish as a louvar or Luvaras Imperialis, a species last seen in Cabo waters some 22 years ago.

The boatful of fishermen who captured the rare beast knew it was something special, yet it became the fish that got away--stolen from under their noses.

As related by Capt. Josue Moreno to Pisces, the Marina II headed out for a half day of fishing when the crew and fishing tourists came across a huge fish circling on the top of the water.

"I thought it was a red snapper or tuna," Moreno told Pisces. "So we went over to investigate and saw this really weird fish, like something we had never seen before. It was still alive, but almost dead, struggling to breathe. So we gaffed it and had a really hard time getting it onto the swimstep. The tourists on board were amazed and kept asking us what it was, but we had no idea."

The Marina II was said to have stopped to catch a few dorado before heading in to have the big, mystery fish weighed and filleted.

Only that's not exactly what happened.

As Pisces Sportfishing Fleet found out on Tuesday, the tale Moreno told was a lie.

The real story surfaced when Pisces spoke with angler Joe Estrada of San Antonio, Texas. He and some friends had chartered the boat Dr. Pescado II. Less than four miles from the Lighthouse off Cabo, they spotted the mystery fish circling on top of the water, they gaffed it and they tied it onto the swimstep.

"We wanted to head back with the fish," Estrada told Pisces. "We knew it was an unusual catch." But the captain said, "the dorado bite is good, let's stay and fish and I will find somebody to take it back."

So, not wanting the fish to sit out in the sun while they were fishing, the captain radioed the Marina II, and its captain agreed to take the fish in.

"Our skipper, Oscar, told the other skipper to take it back for us and put it on ice. You can hear him saying that on our video," Estrada told Doug Olander of Sport Fishing.

The video below shows how the fish was transferred from one boat to the other. The fish was hooked to a buoy. The Dr. Pescado II left it floating for the Marina II, which scooped up the fish and headed in to port.

It was the last Estrada and his fishing group saw of the fish. As you can see in the photo above, Capt. Moreno had a photo taken with the fish before immediately filleting and distributing it to people around the marina. When the Dr. Pescado II returned to port to check on the fish, it was long gone.

"I like the fact that everybody was fed," Estrada told Pisces. "I hate to see fish go to waste and I am glad that so many families got fed."

But he sure wishes he had been able to take a few fillets home with him.

"I found out that they are really good eating," Estrada told Sport Fishing. "And I love to cook fish. That was heartbreaking."

Estrada told Pisces that his skipper Oscar "felt betrayed," though we can't help but wonder if Oscar might have gotten any of those fillets. Hmmm.

See Estrada's entire YouTube video here. We start the video below at 1:25, right when they describe how they're going to hand the fish off. "Let it be known we found the fish...We caught this fish, the rarest fish in the world," you can hear someone say. And, appropriately, you also hear, "Adios."