news
Site Home > news home
A freakish-looking fish hauled recently from the chilly depths of northeastern Canada has been identified as a long-nosed chimaera. 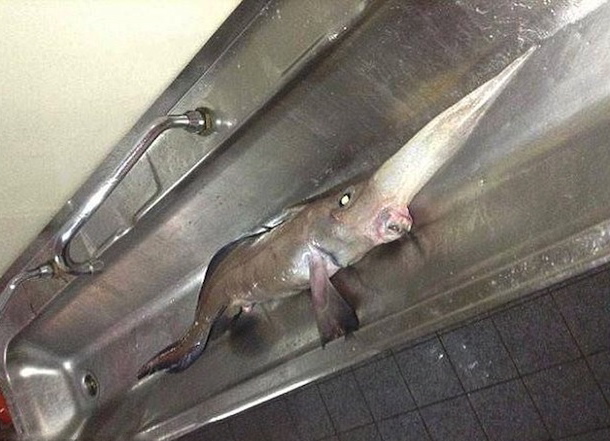 The identity of the fish, which boasts a whip-like tail and an enlarged cone-shaped nose, remained a mystery for days after it was captured by Nunavut fishermen in the Hudson Strait.

That’s understandable because these denizens, although they exist in oceans around the world, inhabit depths of up to 6,000 feet and are rarely encountered.

Nigel Hussey, a researcher with the Ocean Tracking Network, solved the mystery and told Canada’s CBC News that it’s only the second time a long-nosed chimaera has been documented in the region between Canada and Greenland.

A photo of the mystery fish was widely circulated on the Internet before it was identified. Some had incorrectly identified the fish as a goblin shark.

Long-nosed chimaeras, which have hideous-looking mouths loaded with sharp teeth, measure to about five feet. They probe the darkness with enlarged snouts that contain sensory nerve endings that aid in the search for prey.

Since these distant relatives of sharks and rays are rarely encountered and poorly understood, they’re known by several false names, including ghost shark and rat-tail.

Perhaps it’s good that these fish are rarely encountered, too, because a highly venomous spine can be found on their primary dorsal fin.

Definitely a creature fit for the abyss.