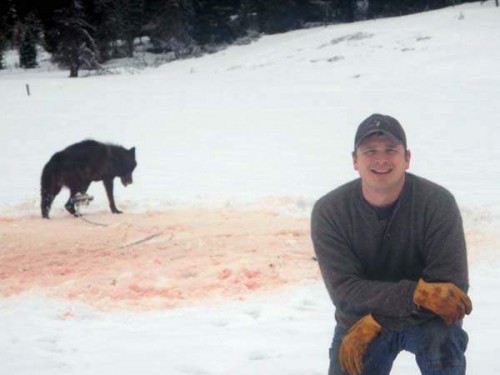 (OutdoorHub) - Trapper Josh Bransford has created quite the controversy for himself and the hunting and trapping community as a whole. Earlier in March, Bransford, a fire management officer from Idaho, posted a photo and a story on the hunting and trapping website www.Trapperman.com. The photo appears to show a living male wolf restrained in a trap, with a large amount of blood on the ground as Bransford appears to smile in the foreground. While wolf trapping and hunting is legal in Idaho, the controversy comes from the fact that the animal is still alive and may be suffering. Many groups are calling for an investigation, and possibly prosecution, including the Center for Biological Diversity, which has requested that the Idaho Attorney General investigate the matter. However, no charges have been filed against Mr. Bransford at this time.

According to state officials, Mr. Bransford had met all the necessary conditions to legally hunt or trap wolves. This means that he participated in a mandatory state class on wolf trapping, had permission to trap on the land, and Mr. Bransford had the necessary permits to trap wolves. In their brief investigation, state conservation officers found no immediate wrongdoing on the part of Mr. Bransford. However the assertion that Mr. Bransford is innocent has been challenged by environmental and animals’ rights groups which believe that in posing with what appears to be an injured animal, Mr. Bransford is in violation of Title 25, Chapter 35 of the Idaho Code, which prohibits animal cruelty. These claims may or may not have any validity given the small amount of actual evidence that is available at this time.

I contacted a respected professional trapper who has worked with the US Fish and Wildlife Service who agreed to speak with me on condition of anonymity, who I will refer to as John. When I showed him the picture, the first thing that he said was that “these types of traps are not meant to wound the animal, they are simply meant to hold the animal in one place,” adding that “these are not the vicious traps you see on television and in the movies with sharp teeth that snap and hurt the animal.” John went on to say that “in the past traps didn’t account for the suffering of the animal, and they cut off the circulation to limbs, which would then lead to animals trying to chew off their own limbs. This also happens when an oversized trap is used but in this photo it appears he used the correct size trap so it would not be responsible for torn limbs.” When I asked him where the apparent blood in the photograph came from he was not exactly sure. He said that “I am almost certain that that blood is not from the trap, and barring any extra human influence my best guess is that the blood may have been from the wolf’s mouth as he tried to chew on the trap or trap chain.”

In conclusion, John said that “Any trapper will tell you that they want to be as humane as possible and inflict the least suffering on animals. Trappers are more humane than ever before due to the amount of money invested into scientific studies. When I trap an animal I dispatch it immediately upon discovery so that it does not suffer, or escape injured.”

Idaho has laws that make it a crime for any individual who “causes or procures any animal to be cruelly treated, or who, having the charge or custody of any animal either as owner or otherwise, subjects any animal to cruelty.” This situation has inflamed the already fragile relations between hunters, environmentalists, and animals’ rights groups which have been deeply divided over the 2011 USFWS services decision to remove many wolf populations from the endangered species list.