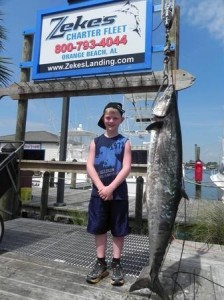 If Andrew Quinn has to write a paper on what he did on his spring break he won’t have a problem finding a subject.

The second grader from Mason County Central Elementary School in Scottville, Mich. visited the white beaches of Orange Beach, Ala. for his spring break but it was his fishing trip that turned heads.

The youngster wasn’t that impressed by his accomplishment and couldn’t wait to get back to the beach and the hotel pool for swimming, family members said.

The tussle with the record fish left Quinn a little worse for wear. He had bumps and bruises and blistered hands by the time the battle ended.

“I still don’t think he has any idea about what he did. To him, it’s just a big fish,” Neff told the Mobile register. “He was acting like, ‘Don’t y’all do this all the time?’”

The family said they were on their first saltwater fishing trip. They typically fish from a pontoon boat for pike, bass and bream in some interior lakes close to their home which is located eight miles from Lake Michigan.