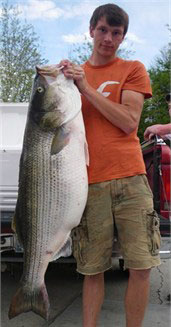 RALEIGH, N.C. (April 9, 2012) — When he launched his 17-foot Hydrosport on Hiwassee Reservoir on the morning of March 31, Tyler Shields expected he’d catch a few largemouth bass, maybe a smallmouth bass or two. What he didn’t expect to catch, however, was the new freshwater striped bass state record.

When he first hooked the giant fish, Shields, who was who was fishing with his cousin, Logan Howard, 15, and friend, Caleb Davis, 15, thought that it was a catfish. However, when he got the fish to the boat, he saw that it was “a big striper.” He didn’t realize how big it was until he got to the dock and a friend’s father, Brian Kilpatrick, suggested that it might be a new state record and recommended that Shields get it weighed.

The grocery store that Shields visited initially had scales that went up to only 50 pounds. He eventually had the fish weighed on N.C. Department of Agriculture-certified scales at Interstate Welding and Steel Supply, in Marble.

Powell Wheeler, a district fisheries biologist for the N.C. Wildlife Resources Commission, verified that the behemoth was a striped bass and exceeded the existing state record.

Shields, who has a lifetime fishing license, prefers trying his luck on Hiwassee because of its close proximity to his home and because he knows Hiwassee so well — not surprising since it’s the only the lake he’s fished since he picked up a rod and reel four years ago.

Although he said he knew that the last state record striped bass came from Hiwassee — and had heard of anglers occasionally catching whopper striped bass — Shields said he prefers catching largemouth, smallmouth and spotted bass year round, and catfish in the summer.

As evidenced by the two state records, Hiwassee Reservoir harbors some very large striped bass, particularly for reservoir striped bass, which typically don’t get as large as their coastal counterparts.

Striped bass, or “stripers,” are regarded mostly as a coastal water fish, living their adult lives in the ocean and migrating up into coastal rivers to spawn. If conditions are right, as they are in Hiwassee, striped bass can thrive in freshwater.

The Wildlife Commission stocks striped bass into several freshwater reservoirs in the Piedmont and Mountain regions, but ironically, Hiwassee Reservoir is not stocked with striped bass. Striped bass in Hiwassee are the “Houdinis” of the fish world, having traversed several obstacles to make it into the reservoir.

“We’ve always focused on other fisheries in Lake Hiwassee, particularly walleye and black basses,” Wheeler said. “However, the Georgia Department of Natural Resources stocks stripers upstream of Hiwassee in Nottely Reservoir. Occasionally, a striper survives passing through Nottely Dam turbine or over the spillway and swims 13 miles down the Nottely River to Hiwassee Reservoir.”

The few striped bass that make it from Nottely Reservoir to Hiwassee tend to grow very large, very fast.

“The rarity of striped bass in Hiwassee coupled with the abundance of forage fishes in the reservoir are the main reasons why Hiwassee has produced the last two freshwater fishing state records for striped bass,” Wheeler said. “In the middle of Hiwassee where stripers are often found, there is simply a lot of food and few other predators to compete with.”

The Wildlife Commission does not manage Hiwassee Reservoir actively for striped bass, but Wheeler said that he has had several encounters with large stripers in some of his fish-sampling work.

“Some anglers also are aware of these very large, but rare, fish,” Wheeler said. “They’ll actively target them in Hiwassee.”

However, most Hiwassee anglers, like Shields, prefer fishing for largemouth bass and smallmouth bass.

Shields’ record is unique in that it not only breaks the freshwater state record, but also exceeds the current saltwater state record as well. That striper, which was caught off Oregon Inlet in 2011, weighed 64 pounds, according to the N.C. Division of Marine Fisheries, which recognizes state records of fish only from oceans, estuaries and coastal rivers.