(Yahoo News) - A saltwater crocodile weighing more than a ton and suspected of killing two people in the Philippines has been declared the largest such reptile in captivity by the Guinness Book of World Records. 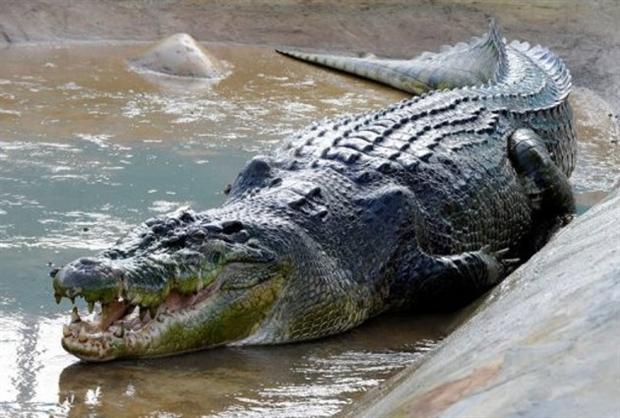 The 6.17-metre (20.24-foot) male, nicknamed "Lolong", was captured in the Agusan marsh on the southern island of Mindanao last September after a two-year search following the killing of a girl and the disappearance of a fisherman.

"The largest crocodile in captivity is Lolong, a saltwater crocodile (Crocodylus porosus), who measured 6.17 m," Guinness said on its website.

"Lolong's weight was also measured at a nearby truck weigh-bridge and verified as approximately 1,075 kg (2,370 lbs)."

Welinda Asis Elorde, media affairs coordinator for the town of Bunawan, which has custody of the new record-holder, said Monday the local government had received an official certification from Guinness.

"He's doing well. I think he has already adapted to his new environment," Elorde told AFP by telephone.

At first, Lolong was fed the equivalent of 10 percent of his body weight in beef, pork and poultry every month, but an expert put him on a diet of eight to 10 kilograms a week to get him to be more active, she added.

The expert also recommended that the meat be given with skin and feathers attached, to help digestion.

"I was there (at the crocodile park where Lolong is kept) yesterday and he remains a big tourist attraction. Hundreds of people visit him in a day," Elorde added.

The Guinness record was previously held by Cassius, a 5.48-metre Australian saltwater crocodile weighing close to a ton.

Cassius has been kept at a crocodile park at an island off Queensland since his capture in the Northern Territory in 1984.