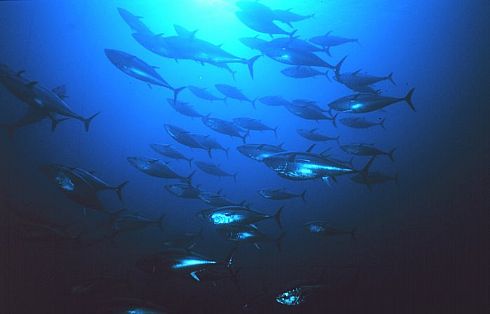 90 % of All Large Fish Including Tuna, Marlin, Swordfish, Sharks, Cod and Halibut are Gone

The cover story of the May 15th issue of the international journal Nature reveals that we have only 10% of all large fish—both open ocean species including tuna, swordfish, marlin and the large groundfish such as cod, halibut, skates and flounder—left in the sea. Most strikingly, the study shows that industrial fisheries take only ten to fifteen years to grind any new fish community they encounter to one tenth of what it was before.

“From giant blue marlin to mighty bluefin tuna, and from tropical groupers to Antarctic cod, industrial fishing has scoured the global ocean. There is no blue frontier left,” says lead author Ransom Myers, a world-leading fisheries biologist based at Dalhousie University in Canada.  “Since 1950, with the onset of industrialized fisheries, we have rapidly reduced the resource base to less than 10% – not just in some areas, not just for some stocks, but for entire communities of these large fish species from the tropics to the poles.”

This study not only confirms the bad news emerging from individual fisheries showing that species like cod can be fished below recovery, but it also reveals a grim global mosaic that demands immediate action. “The impact we have had on ocean ecosystems has been vastly underestimated,” says co-author Boris Worm of Dalhousie University and the University of Kiel in Germany. “These are the megafauna, the big predators of the sea, and the species we most value. Their depletion not only threatens the future of these fish and the fishers that depend on them, it could also bring about a complete re-organization of ocean ecosystems, with unknown global consequences.”

Taking 10 years to assemble data sets representing all major fisheries in the world, the authors constructed trajectories of biomass and composition of large predatory fish communities from four continental shelves and nine oceanic systems, from the beginning of exploitation to the present. For shelf ecosystems they used data from standardized research trawl surveys to track the decline in the populations of large fishes.

Most surprising are the new discoveries from oceanic systems where people have presumed there are still untapped reservoirs of large fish.  To measure the decline in open ocean ecosystems, the researchers gained access to Japanese longlining data. Pelagic longlines are the most widespread fishing gear, and the Japanese fleet the most widespread longline operation, covering all oceans except the circumpolar seas. Longlines catch a wide range of species in a consistent way over vast areas. “Whereas longlines used to catch 10 fish per 100 hooks, now they are lucky to catch one,” says Myers.

“The longlining data tell a story we have not heard before. It is coherent and consistent throughout, and it comes from a single source,” says Daniel Pauly, a world-renowned fisheries scientist from the University of British Columbia. “It shows how Japanese longlining has expanded globally. It is like a hole burning through paper.  As the hole expands, the edge is where the fisheries concentrate until there is nowhere left to go. Because longlining technology has improved, the authors’ estimates are conservative. If the catch rate has dropped by a factor of ten and the technology has improved, the declines are even greater than they are saying.”

Myers and Worm sent their findings to many of the top fisheries scientists in the world for review. “We found there was acceptance of the overall pattern of rapid depletion of communities, but there was more controversy when it came to the current status of individual species, particularly with respect to tuna,” says Myers. “Understandably, some fisheries managers find it very hard to accept.”

“This is because we have forgotten what we used to have,” says Jeremy Jackson of the Scripps Institution of Oceanography. “We had oceans full of heroic fish - literally sea monsters. People used to harpoon three-meter long swordfish in rowboats. Hemingway’s Old Man and the Sea was for real.”

Myers and Worm observe that the tendency in fisheries biology to use only the most recent data increases the problem of shifting baselines. These great fish are not only declining in numbers, but with intense fishing pressure they can never attain the sizes they once did. “Where detailed data are available we see that the average size of these top predators is only one fifth to one half of what is used to be. The few blue marlin today reach one fifth of the weight they once had. In many cases, the fish caught today are under such intense fishing pressure, they never even have the chance to reproduce,” says Myers.

This is something Ransom Myers has seen before. He was one of the leading Canadian

scientists who fought hard to save the cod. In the 1980’s Myers was a fisheries biologist with the Department of Fisheries and Oceans in Newfoundland.  “No one understood how fast the decline happened at the end—it was only a couple of years,” says Myers. “The quotas had been too high. They refused to slow down because they had seen lots of little fish coming in—a good year class. The little fish were caught and discarded and there was no future.”

Myers’ most recent findings raise critical questions at a much larger scale. “This isn’t about just about one species,” he says.  “The sustainability of fisheries is being severely compromised worldwide.” At the Johannesburg World Summit on Sustainable Development, 192 Nations called on the global community to restore world fisheries stocks to levels that can provide maximum sustainable yield by 2015. The authors of this comprehensive new study say their results provide the “missing baseline” needed to restore fisheries and marine ecosystems to healthy levels.

“Numbers dropped fastest during the first years, as fisheries moved into new areas,” says Worm, “often before any fisheries management protocols were in place—and before anyone was looking.” Without this baseline information, most scientists and managers are hardly aware of the profound magnitude of change that took place at the beginning of almost every major fishery. As a result, managers today are working hard to stabilize the last 10%—often unaware that the virgin biomass of their fishery was once ten times greater. But there is some good news too: “In most regions we saw increases in faster-growing species which seemed to fill in for overfished stocks. This points to the recovery potential for the community at large,” Worm says. “But unfortunately we often switch fishing pressure to species that are doing well, and drive them down in turn. This sabotages recovery.”

The solution to this global problem is simple, say the scientists, yet it is extremely hard to do in practice.  Recovery requires overall reduction of fishing mortality (the percentage of fish killed each year). This includes reducing quotas, reducing overall effort, cutting subsidies, reducing bycatch and creating networks of marine reserves. Myers argues, “A minimum reduction of 50% of fishing mortality may be necessary to avoid further declines of particularly sensitive species.” He further emphasizes, “If stocks were restored to higher abundance, we could get just as much fish out of the ocean by putting in only 1/3 to 1/10 of the effort. It would be difficult for fishermen initially—but they will see the gains in the long run.”

This may sound drastic, but consider a world where tuna, sharks and swordfish, are merely memories.  “We are in massive denial and continue to bicker over the last shrinking numbers of survivors, employing satellites and sensors to catch the last fish left,” says Myers. “We have to understand how close to extinction some of these populations really are. And we must act now, before they have reached the point of no return. I want there to be hammerhead sharks and bluefin tuna around when my five-year-old son grows up. If present fishing levels persist, these great fish will go the way of the dinosaurs.”