news
Site Home > news home
Donna Pascoe did not know what she had hooked when line began to race from her reel; she only knew that it was something enormous.

“I hooked up at 9:10 a.m. with the reel screaming,” she told Saltwater Sportsman. “The fish never surfaced, so we had no idea what was on the other end. After three hours, the fish surfaced and the skipper yelled, ’Tuna, world record!” 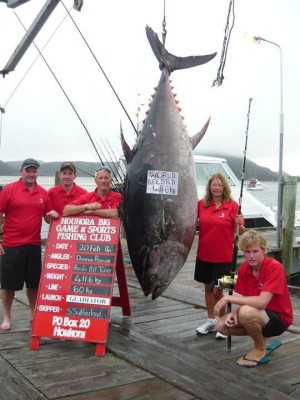 The Pacific bluefin tuna, caught after a four-hour marathon battle during a tournament on February 19, 2014 tipped the scale at 907 pounds.

The New Zealand Sport Fishing Council this week stated that it’s the largest fish ever caught by a female angler off New Zealand. But the catch is even more significant.

The monstrous bluefin is 130 pounds heavier than the current all-tackle world record (heaviest of a species), which the International Game Fish Association lists as a 777-pound, 1-ounce Pacific bluefin caught off New Zealand by Kevin Baker last September.

The New Zealand Sportfishing Council said it planned to submit details of Pascoe’s catch to the IGFA, which would then take weeks or perhaps months to review the submission. 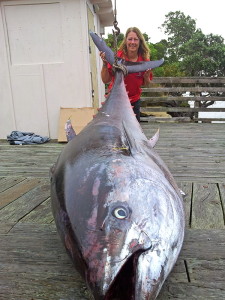 As for Pascoe, 56, she’ll remember the experience for the rest of her life regardless of whether her name is placed in the record book.