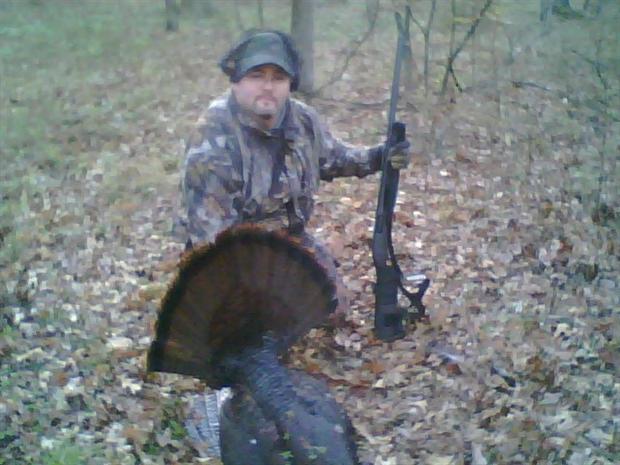 Description: Got my First Gobbler yesterday. He's about 2 years old, has 3/4 inch spurs, and a 9 inch beard. Estimated weight is between 25-30 pounds. It was taken with my Remington 870 Express using a 2 3/4 inch Remington Turkey shell with No. 4 Birdshot and a Turkey Choke. There's a farm I have access to hunt on and after letting the farmer know I'd be back there looking for Turkey with a friend of mine, we set off looking for a Turkey. Now, the friend that originally got me access swore up and down that no Turkey had ever been taken on this land when I asked about it; to back him up, the landowner's son said the same thing, yet during a deer drive back in January, my other friend noticed Gobbler sign and suggested we check it out. I wasn't really sure we'd find anything, so I went with minimal gear (camo, knife, and shotgun). We walked up his back trail that he drives his tractor on and came upon the Powerline right of way that he has running through his property. We stopped at the intersection before daybreak and just listened. Not 2 minutes later, we heard a Gobble maybe 40 yards from us. We went 10 yards into the right of way, and we backed into the woods with me going back 10 feet, and my friend backing off 20. He motioned that he would start calling the Turkey in, and for me to be ready to shoot. I notice a Hen picking away on the ground purring and yelping (it's a strange sound), and we hear more Gobbling coming from the trees. He's roosted. My friend starts calling and the Gobbler answers, Canadian Geese honk overhead and the Gobbler answers, a Blue Heron flies over us and the Gobbler answers. These birds will react to almost anything (especially crow calls) So, my friend calls more aggressively on his Slate Call, and down comes Mr. Gobbler. This thing lands in mid-strut and starts moving behind the trees on the other side of the right -of -way. Estimated distance is 40 yards. He Gobbles again, and my friend answers with some Putts. Then, he REALLY starts strutting and I can see the beard, and his head. I position my shotgun bead on his head and then pull the trigger. He goes down hard and starts flapping all over the place. My friend goes in, grabs the Turkey by his feet and avoids being nipped by the Turkey. Eventually the flapping stops and the bird's dead. The time is 6:30. We heard the first Gobble before 6:10. We lucked into the Turkey location, were able to call him in and kill him. Shot distance was probably 20 yards after he walked out of the woods placing himself before the calling and the Hen that's on the ground. The Tail fan, the beard, and the spurs will be mounted along with the shotgun hull. I am now hooked. BTW, Turkeys are bigger than they look at a distance (as you can tell by the pictures below. They are also UGLY! Pictures are below. The Quality's not the greatest due to the cell phone camera: Uploaded: 4/20/2009 by TJ Parmele